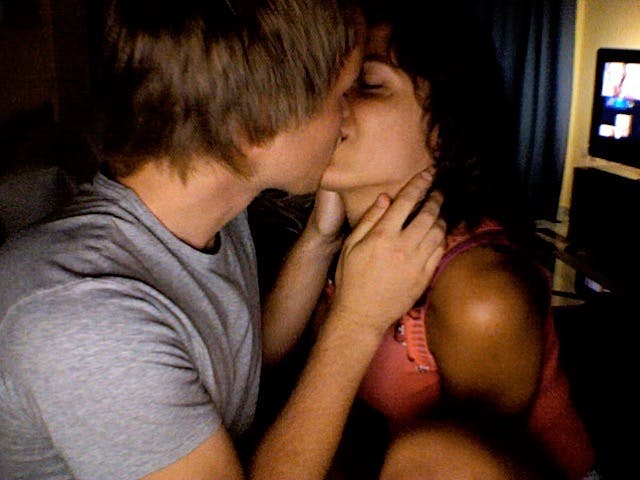 One of our first pictures together, taken with Photo Booth at his place.

I’ve been wanting to write about how I met Alex for years and the reason why I waited so long is that it’s one of those stories you only see in movies. I wanted to do it justice in writing. But today I found myself typing—it happens sometimes, one minute I’m doing something and the next I’m writing—so I might just as well continue.

It was summer of 2007 and although I had come to Marbella with my then-boyfriend—let’s call him boyfriend—my heart was free and very honestly so. In the two years following the breakup with my first love—a handsome, kind, loyal young man I was with for five beautiful and changing years, most of my adolescence—I was heartbroken and unhappy, and had come to the selfish conclusion that being with someone, anyone who made me feel good, was better and easier than being alone.

The guy I came to Marbella with was that someone. I wasn’t in love—unfortunately I can’t say the same about him—but when he suggested to spend the summer out of Italy, it seemed the right escape from a life that felt as tight as a pair of jeans washed in 60°C. I was bored and tired and demotivated. I needed a change (and to learn Spanish to graduate, and end my school chapter).

That change came in the shape of a summer job in a lovely Italian restaurant named Terrazza Dual in Marbella, Spain. Boyfriend and I would work there for the whole summer—except that boyfriend, with his great barman skills, got a better offer to work in a cocktail bar just a couple of weeks after arriving, and took it. There wasn’t much time to rest or travel, we were working, sometimes in different shifts so we wouldn’t even see each other during the day and the few nights we were off, we’d go out with our new friends. It felt good to be far from home, but I knew I was deceiving myself while trying to allow my heart to do some healing.

One June night, this handsome, blond, tanned, scandinavian-looking guy walked into the restaurant. I noticed him because he was blond, tanned and handsome. Duh. He ordered a pizza Dante to go, waited at the counter while bluntly staring at me with those dreamy, almond-shaped blue eyes, and then left.

He came back many other times throughout the summer: every time he would order a pizza Dante, sit at the counter and stare at me while pretending to play with what I later found out to be the first generation iPhone (it had just come out in the US and very few people in Europe had it)—that very iPhone is still on our living room shelf on display. And every time, as soon as he walked in, the staff would look at me and raise their eyebrows with a grin on their faces as to say, look who’s here. He had officially become the not-so-secret Admirer.

“When I walked into the empty restaurant, three girls came straight at me and I picked Carlotta. She was sooo gorgeous, in that red polo that showed her hourglass figure—it's the best body type, you know?—and her wavy, long hair loosely tied up in a pony tail. That night I went back home and told Cristina, a friend who was staying with me for a few weeks, I had met the woman I would marry and have children with. But it took me quite a while to find the courage to ask her out”.

Two months, precisely. Of waiters smiling and making jokes. Of cooks peeking from the kitchen not to miss the show. Of waiting for pizza Dante, sitting and staring. Of feeling flattered and somewhat excited. Of forgetting that boyfriend was waiting for me at home.

Two more months and it was time for me to go back to Italy. Boyfriend had left the week before to go back to Uni, but I had two more weeks to say goodbye to Marbella. Forever, I thought. For the first time in a long time, it felt liberating to be by myself, to let my emotions run free and to really—really—feel that unhappiness that I had patched for so long. I was sitting a lot by the sea, not eating much, speaking fluent Spanish and sharing lots of tears with my Argentinian friend Natalia. It felt sad and amazingly—masochistically?—good.

Two more weeks before going back to Italy. I’ll remember that night forever. An American guy ordered two pizzas to go, and we spoke for a long time about the beauty of bilingual children. He told me how his daughter and son, 5 and 3, could switch not only from Spanish to English, but also from American English to British English in a heartbeat. I told him how crazy I was about his gorgeous language, and how much I wanted to become as bilingual as age would allow in my lifetime. I didn’t know then, but I’d spend a lot of time with that guy and his wife in the years to come.

“I was still at the office working when Matt called me. He said, 'I just left Terraza Dual, you’re crazy if you don’t go and ask her out'. I knew he was right, I had known for a while. That was the night. I left the office, jumped on the first bus, got off as close as possible to the restaurant and walked the rest of the way listening to Sealion by Feist (it made me happy). A week before, my friend Ivan had told me about the supermodel theory of dating: don’t ask, just state what you want. That was it, I was gonna go in there and tell her to go out with me”.

That night, Alex walked in, sat at the counter, ordered his pizza Dante, and stared a me as usual. Inside, in his reserved Finnish soul, he knew he had to collect all his courage to ask me out. Me, the girl in the red polo he had stared at for the whole summer.

When he asked for the bill, after two months of nothing else than pizza Dante, please and thanks, he actually talked to me. I don’t remember exactly what he said or how he started, but I remember very clearly what came next.

“We should go out for lunch sometime”.