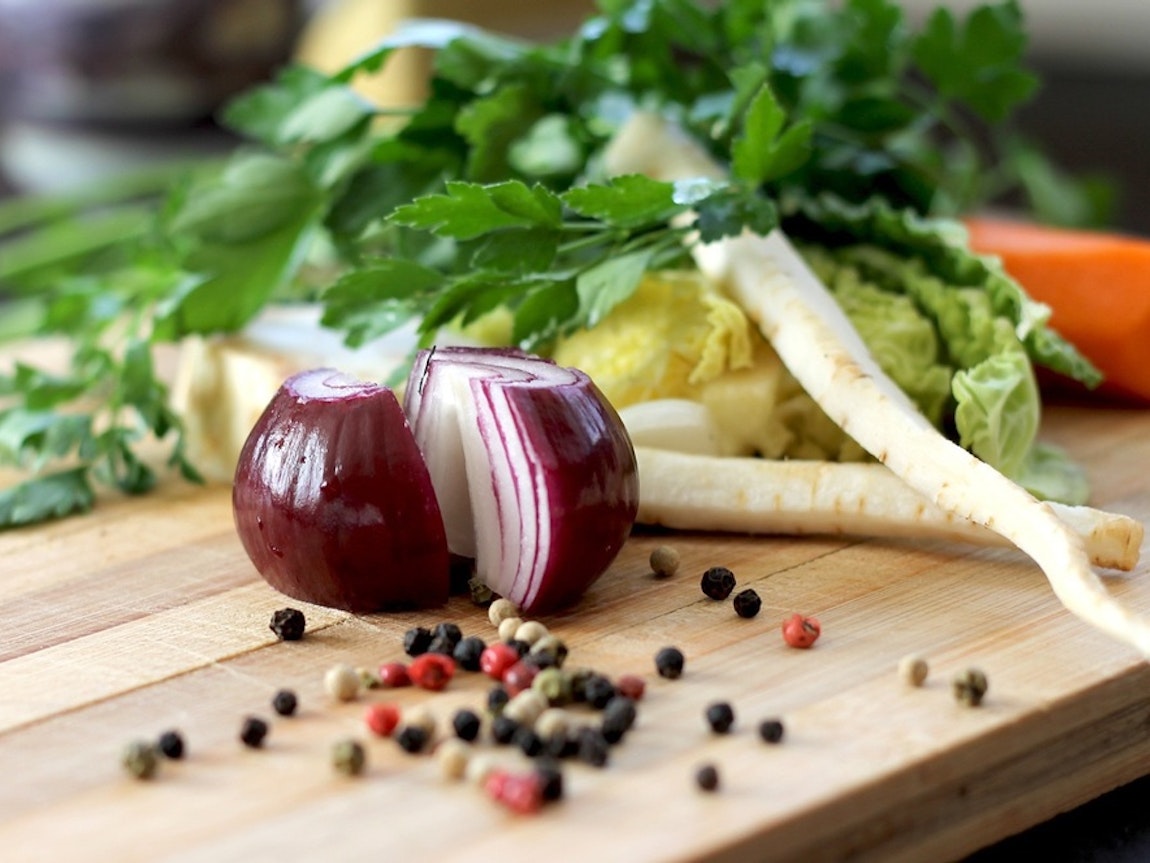 When I tell people about my eating style—high in fat, low in carbs—they get very opinionated. “That’s wrong! You exercise a lot, your muscles need carbs! Fat is bad for you! Too many eggs rise your cholesterol levels! Extremes are not good, you should have a little bit of everything”… These are just few of the things they say.

My tendency lately is to dismiss them quickly and move on to another topic. They’re just not ready to have their whole understanding of food revolutionised (literally turned upside-down).

When it comes to people I care about, though, I always take the time to explain what it means to me to be Paleo. I don’t like to put labels on my eating style—for me, it simply means to eat natural, non-processed foods—but “Paleo” is the easiest way to define it.

We eat meat, fish, eggs, vegetables, fruit, nuts and we cook our food in butter or extra vergin olive oil. Our diet looks pretty much like this:

Over the past three years, my husband and I have been reading and researching a lot about food and we came to understand that the Paleo diet is the healthiest way of life. It really is the perfect human diet. Not to lose weight or get ready for bikini season, but to be healthy, avoid current/future diseases and allergies and, who knows, maybe live longer.

At the beginning of my Paleo journey, I was doing it just to lose weight and get rid of my bad eating habits—something I auto diagnosed as obsessive eating disorder. All the wrong reasons. I would often slip back into my old ways—sometimes for months—and it took a very long time to fully commit to it.

All I remember was tiny victories followed by huge defeats and lots—lots—of craving and unhappiness about what I couldn’t eat, but still wanted to eat.

Over time, though, I noticed a switch in my mind. I started doing it more and more for the health benefits and less and less for the weight loss. After every period of unhealthy eating, I would go back to Paleo with restored energy and more motivated than ever.

Eventually, I stopped saying, “I CAN’T eat this”, but rather “I DON’T WANT to eat this”. And my Paleo periods became longer and longer each time.

Over the years, I had so many confirmations of it being THE best and healthiest human diet, that I would have been a fool to ignore all the evidence and blindly keep eating the way I was taught to—the famous “food pyramid” we all studied in school.

Truth is, it’s still not all roses and I still have my bad, self-destructing days. I’ve always had a very sweet tooth and I still struggle—forever?—with cravings, but I slowly realised it’s a small price to pay to be healthier.

After almost three years of back and forths, I’m now 95% Paleo and very proud of it.

I think of cheesecake with raspberry compote, and drool. But I’m getting used to it. I miss them less and less. And when I do indulge, it doesn’t feel as addictive as before. I still love my sweets, but now I feel like I can live without.

Last time I had pizza, I felt so bloated and “drunk”—like after a night out, when you sleep one hour and go straight to work—that if I now find myself at a dinner party where everybody is having pizza, I’ll order a salad for myself and maybe try a bite of my friend’s pizza.

My husband and I now have a great strategy: we focus on what we can control and don’t stress about what we can’t control.

Ironically, this principle works with many things in life, but that’s another story.

Where do you get your energy if you don't eat carbs?

I do eat carbs, lots of them. Fruit and vegetables are full of carbs. What I don’t eat is processed carbs—all those products made from scratch in factories and filled with rubbish (natural (?) flavourings and colourings, yeast extracts, soy proteins, seasonings, citric acids…).

Before agriculture, people didn’t have any artificial, processed carbs. They only ate the carbs they could get from natural foods, like fruit and vegetables. And they could still outrun a gazelle and kill it for dinner!

Yes, their lifespan was much shorter, but that’s because of the dangers of living back then. As my favourite paleo article says:

Give those hunter-gatherers access to modern technology and medicine and I bet their lifespan would easily surpass ours.Our bodies are designed to operate on a much lower amount of carbs than we eat.

It's all over the world

There are many things we can’t control in our life. Passive smoke coming from the table next to us at the restaurant, somebody crashing into the back of our car, the endless exposure to commercials and advertisements…

But we can control what we introduce in our bodies. We can decide what to eat and what not to. We can be healthy. We can be Paleo.

As for me, I want to be Paleo.