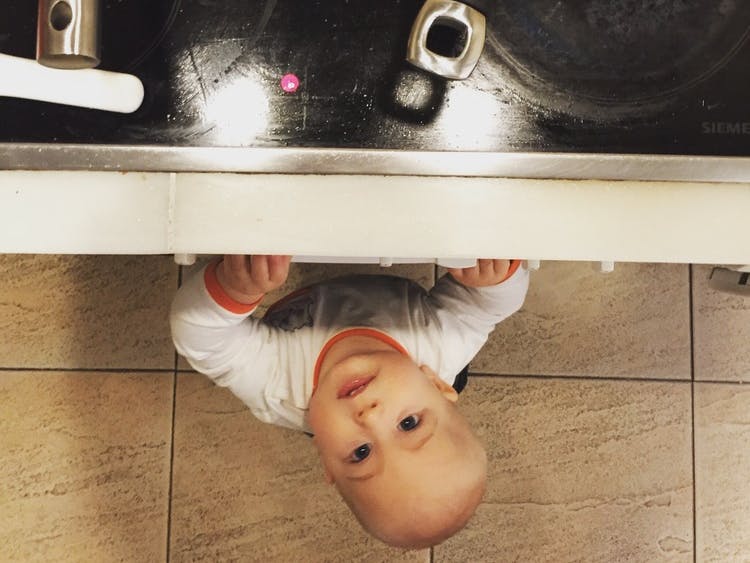 And I noticed two things:

Every time that he falls and cries—I’m not changing subject, stick with me—Alex replicates the fall in a goofy and theatrical way, showing Oliver that everything is OK. Oliver laughs, and all is forgotten. If we try to confort him, though, he cries for several minutes.

Maybe this also works for saying NO. Maybe if we show him the consequences, he’ll be more likely to understand that NO has a reason—which often is keeping him alive. What if, instead of not letting him standing up holding on to the bucket of water, we do say NO, but then we let him do it, get wet and—most likely—get a (monitored) fright? Will he do it again? I guess it depends on the child, on the situation, on how much fun it is to get wet—there are too many variables to speculate, but maybe it’s worth trying.

All this made me think—and this is one of my cobwebs of thoughts which my blog takes its name from—of the Montessori method, and of one of my favourite quotes from Maria Montessori:

If you don’t give your baby a glass cup fearing he’ll break it, you value more the glass than the learning process.

Maybe this is also partly why the Montessori method doesn’t use rewards and punishments, but consequences. Cristina from Montessori En Casa talks about it in her post Parenting without rewards or punishments, that I’d like to share with you today. Hope you like it as much as I did.

What is your opinion and experience on this matter?