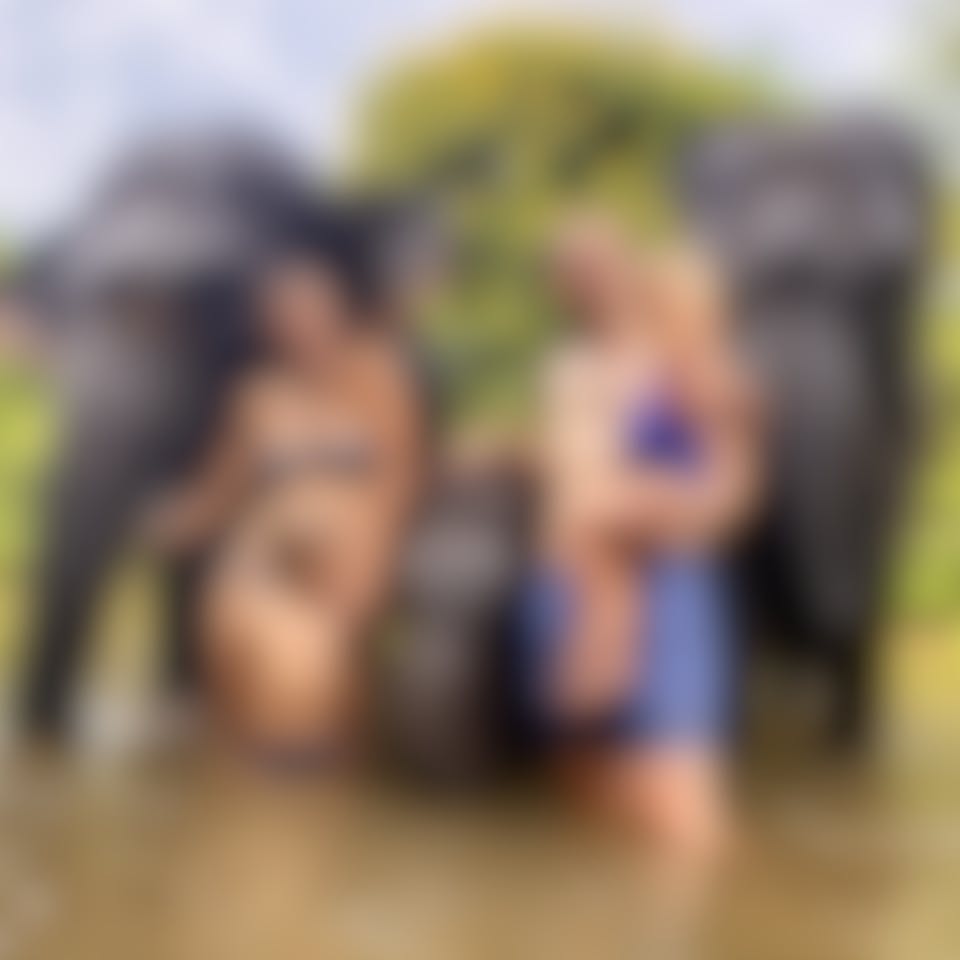 Before you read ahead, I want you to know something important. The title of the post says “meet” and not “see”: that’s because the only ethical way to SEE elephants is in the wilderness, maybe doing a safari where you might see them from a distance. These elephants that we interact with are loved, but not free, they’ve lived with humans for generation and couldn’t survive in the wilderness anymore.

We don’t take our kids to zoos: we don’t like watching animals in a cage (however big it is), and we don’t want to support that business.

That’s why, while in Chiang Mai, we thought that our best chance to meet Asian elephants would be in an ethical elephant sanctuary, where they rescue elephants and give them a new life.

I was about to book the sanctuary that everyone books—because my research led me to believe it was the only really ethical sanctuary in Chiang Mai—when I had an interesting conversation with some locals who happened to be elephant owners. Yep, that’s right!, elephant owners—I’ll get back to it in a second, but first I’ll tell you what I learnt.

They all say they rescue the elephants, but at the end of the day there’s always and only money involved. It’s all business—and not an ethical one, in any way. Some sanctuaries have better marketing than others and that’s why they come up in every search, but they’re not any better.

In fact, the better the marketing, the bigger the business, the worse the conditions—not necessarily for the elephants, but for the mahouts (elephant care takers) who are forced to show visitors potentially dangerous male elephants for the sake of the business—because the show must go on.

Families of elephant owners are the only ethical sanctuaries

What not many people know is that in Thailand there are a lot of families that have owned elephants for generations.

Elephants in Thailand used to be part of the family life like a mule would be in a farm: much like a mule would help in the they were used in the Teak wood business. In the 70s, when cutting teak wood became illegal, these families were left with their huge beloved pet elephants to feed: some were forced to sell them, others decided to repurpose them, and created a tourist business out of it.

Nowadays, there are still many families in northern Thailand who’ve had elephants for generations—not because they bought them or “rescued” them, but simply because these elephants are the grandchildren of elephants that have always been part of their family.

Sab’s family is one of them, they’ve been elephant owners for eight generations. After graduating in medical engineering, Seb realised he was happier around elephants and decided to dedicate his life to his elephants by creating a business that allowed him to keep his elephants, make a living, and keep the tradition alive.

As soon as you step in Elephant Carer Home you feel the authenticity, the love, and the respect. This is Seb’s house, a house like any other: his wife is cooking in the kitchen, the baby is crawling to reach a toy, and the older daughter is playing with a friend. And their elephants are chilling (and eating) in the “garden”.

Seb doesn’t call it a business: he decided to open his house and welcome visitors because, well—let’s be honest here—owning elephants is not cheap, they eat 10% of their body weight per day, and you need to find money to feed them.

On top of that, each elephant has his own mahout, a person who takes care of the elephant like it’s his own family: mahouts live 24/7 with their elephants, and never leave their side. These people need food, too, and it’s Seb’s job to provide for them.

That’s why Elephant Carer Home doesn’t feel like a business: it’s Seb’s way of not giving up on this family of elephants that has been with his human family for eight generations, and at the same time make a living while keeping alive the cultural tradition of living with elephants (which he fears disappearing).

There are four elephants at Elephant Carer Home: two females (18 and 19 years old) and two babies (2 and 3 years old): we interacted only with the two moms and the female baby, Wally (pronounced like the robot), because the 3-year-old male is “naughty” and it’s Seb’s responsibility to keep his mahout (and his visitors) safe. There’s a big male, too, but they keep it elsewhere as it’s not safe to expose visitors to him (“even though a big male would be a great selling point”).

The elephants don’t have any chain or rope, and the mahouts don’t secretly hold any sharp object in their hands, like they often have to do in the big “ethical” sanctuaries.

Seb understands English, but doesn’t speak it, so he has a guide, Kano, who leads the tour: he comes from a family of elephant owners himself and he’s also an “elephant doctor”, as he says. But what I liked the most about Kano is that he’s very direct and honest when it comes to answering uncomfortable questions about the elephant business.

A day in the life of a mahout

It’s hard for me to put our day at Elephant Carer Home into words. It’s one of those memories that give me goosebumps and bring tears of joy to my eyes when I think about it. I felt so privileged to be able to spend a day with Seb’s family and elephants.

The way I can describe it best is that we got to spend a day in the life of a mahout.

As soon as we arrived, we met the elephants so they could smell us and get to know us. Elephants are exactly like unfiltered people: they will like you or not. Luckily, they seemed to accept us, and we could take a first picture with them.

We then changed into traditional mahout clothes—elephants are more likely to trust foreign visitors when they wear this blue outfit, because it’s the same one that their mahouts wear.

We fed the elephants a ridiculously huge amount of bananas, (boy, do elephants eat!), and then followed them and the mahouts to the river, where the elephants got in and… laid down in the water. Documentaries are one thing, but seeing these huge bodies kneel, lay on one side and disappear underwater leaving only the tip of the trunk out… well, it’s a whole different thing. 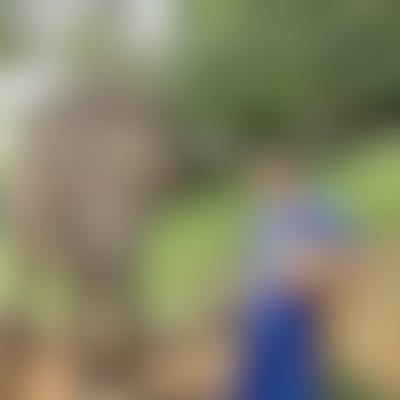 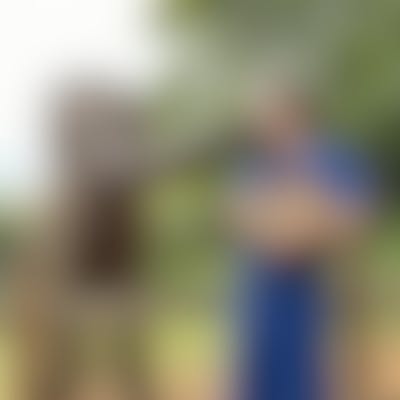 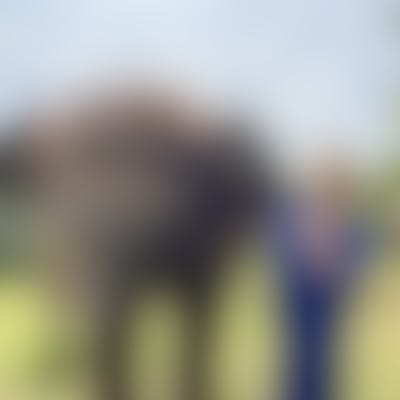 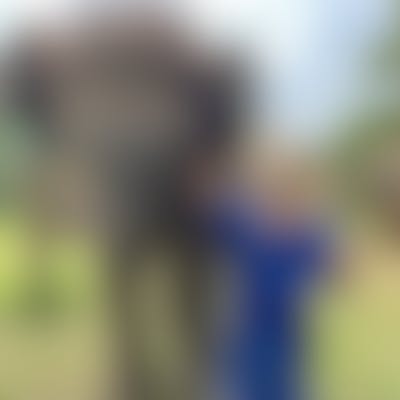 After lunch (a delicious meal that Seb’s family cooked for us), we prepared some wood soap (yep, apparently you can get soap from big branches!) that we would use later to bathe the elephants. We then joined the elephants and the mahouts on their daily walk, where the elephants decided to get in the mud and then in the river again: we sat down on a log and observed. We also observed them later when they decided to feast on a huge bamboo tree.

Just observing these gentle giants made us feel so lucky and privileged, I could have sat there and observed them for days.

But what awaited us was pure magic: when we got to another part of the river, the mahouts said we could take off our clothes and join the elephants in the water, if we wanted… and next thing we know we’re in the river with these giant animals, scrubbing them, splashing them, and trying to avoid their floating poop.

It might not sound magical, but it was! Emily didn’t want to be in the water, so I held her, but Oliver got over his fear and washed baby Wally.

Our day was almost over. We walked the elephants back, waited for them to eat some figs that had fallen from a tree on the way to the house (seriously, the only time I saw the elephant not eating is when they were in the water), said goodbye to them by giving them a pumpkin/rice snack we had previously prepared, thanked Seb’s family and went back to Chiang Mai.

What a day. It’ll be tattooed on our minds forever.

If you want to donate to Elephant Carer Home, you can do it here

PS. Something curious about riding elephants

Riding elephants on their neck, with no saddle, is not wrong: Mahouts and elephant owners have always been riding elephants this way, for generations. It’s a little bit like when we ride horses in western cultures, and riding without a bit is better for the horse. We didn’t do it, but it was interesting to learn.